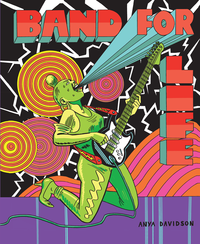 Noise music band of aliens 'n' weirdos from the candy-colored clowning of the comic strip Band for Life, which originally appeared on the VICE.com website, debuting Feb. 21 2014.

After VICE dropped the strip, creator Anya Davidson continued the work on her Tumblr site. In 2016, a compilation of strips, titled Band for Life, was published by Fantagraphics.