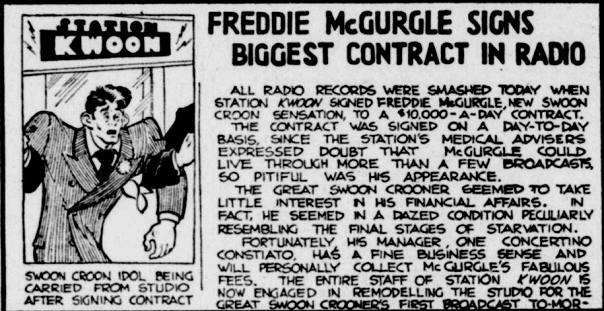 Performing pseudonym of Li'l Abner Yokum in a run of comic strip Li'l Abner from December 1943 to January 1944. In a spoof of the crooner craze (exemplified by Frank Sinatra), cartoonist Al Capp has his protagonist fall afoul of the conniving singer Concertino Constiato. Constiato can sing, but looks hideous. So he gets the idea to turn Abner into a crooner by starving and abusing him until he looks thin and haggard enough. Constiato secretly provides the vocals while "McGurgle" lip-synchs. They win a radio contract with New York City station KWOON. Then McGurgle is kidnapped by an overeager fan club.