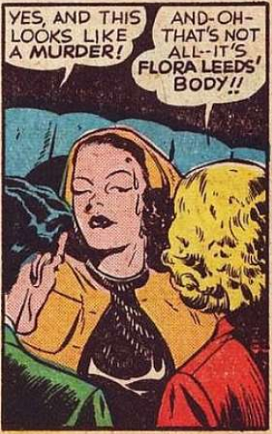 Murdered popular singer in the Lucky Coyne story of misleadingly titled comic book Authentic Police Cases #3 (June 1948). Lucky is driving his reporter gal pal Kitty to interview Leeds at her opening at the Albion. But on the way there, they see a guy jump out of a moving car, and when the car crashes, they find Leeds' body inside.

She had just broken up with fiance Karl Hartman, and was apparently seeing jealous mobster Hugo Dasch, who bankrolled her show. When she broke up with Dasch to return to Hartman, Dasch had his bodyguard murder Leeds and frame Hartman.

There's a lot of confused rushing around, but Dasch is killed, the bodyguard arrested, Harman vindicated, and Leeds is still murdered.