Difference between revisions of "Fedor Mauler" 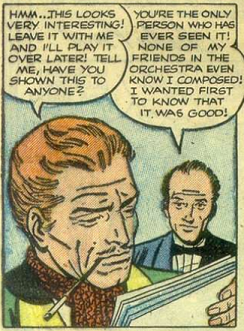 Conductor of an unnamed American City Philharmonic Orchestra from the "Musical Justice" story of comic book Daredevil Comics #104 (November 1953). His violinist and "friend" Abbe Caffa reveals to him privately that he has finished his first symphony after years of work. Smarmy Mauler finds it so good he must steal it. He sends Caffa on a month's vacation, and while he's gone, presents the work as his own and rehearses it with the orchestra. When Caffa returns, he confronts Mauler in front of the orchestra, but is disbelieved, and fired.

Mauler gets away with it, but when people want more compositions, all he can come up with is "trash." So he figures to steal more of Caffa's work to pass off as his own. Caffa tries to trap him by writing a lousy piece using the notes of his name as the theme: A-B-B-E-C-A-F-F-A, and letting Mauler steal it for an original musical competition

Mauler almost gets away with it again, when the judges give him the award (due to the piece's "boldness"). But series protagonists The Little Wise Guys, a bunch of kids, expose him and foil his scheme. Mauler gets fired in disgrace.