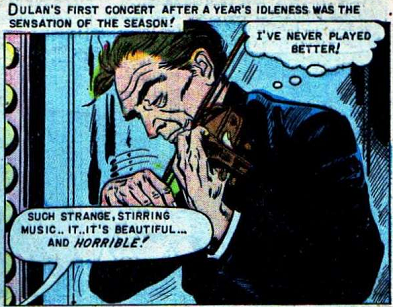 World famous violinist from the "The Hands of Death!" story of Avon Periodicals comic book Eerie #9 (Oct-Nov 1952). An accident has left Dulan's hands mangled and twisted. Desperate, he seeks black magic practitioner Dr. Necros, who lets him go hand shopping for the best pair from one of the many zombies-things he has hanging around in another dimension. Necros magically transplants a new pair of hands onto Dulan, and his comeback concert a year after the accident is "the sensation of the season!"

However, the hands belonged to serial strangler Kurt Lajos, who was executed a decade previously. Dulan is unable to contain the hands' growing bloodlust, and he ends up strangling his best friend George Evans. Dulan flees, and collapses in madness and despair at Necros' now-empty mansion. Bummer.