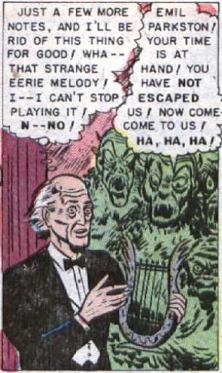 Musician from "The Lyre of Doom" story of horror comic book The Beyond #17 (November 1952).

He's down on his luck when he decides to steal an ancient Greek lyre from a museum. Unfortunately, it's cursed. While he rises to success playing it in concerts, it causes him pain, head bumps, nightmares, and vivid hellish hallucinations.

Or they're real demons as it turns out, and Parkston has unwittingly made a deal with the devil. They come for their due in the middle of a performance. Parkston's lyre burns, enshrouding the stage in black smoke. When it clears, the lyre is ashes and Parkston has been transformed into a satyr. And is dead. So don't steal kids, or convoluted supernatural justice will be served!