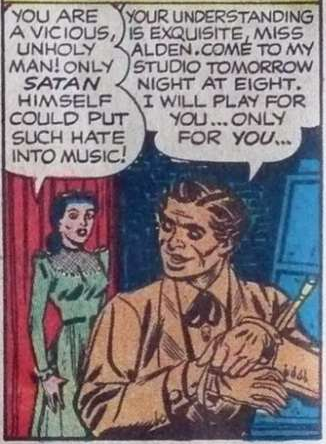 Maniac organist and composer verging on the demonic from "The Fatal Chord" story of horror comic Mister Mystery #6 (July 1952). His "...unparalleled macabre fugues and dirges in the minor key have captured the imagination of the music world for twenty years."

Born about 1906, his widowed mother taught him to play music with feeling. Mostly the feeling hate. Also, she used a whip.

In December 1928 he secretly discovered the "fatal chord," a combination of notes that killed the listener but... somehow not the player who, it needs to pointed out, is also a listener. He immediately tested it out on his mother, successfully.

Some six months later impresario Nicholas Weld walks by his house, hears his music, and gets him a concert and a country-wide tour, AND loses his fiancee Abigail Alden to Chadwick via his evil, seductive music.

Chadwick goes completely insane after surviving his house exploding. From his organ playing. When he tried to kill Weld with the fatal chord, but accidentally killed Alden.