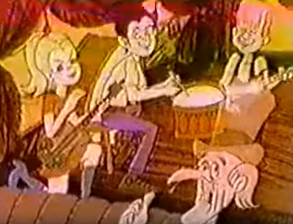 From the 1973 failed pilot "The Mini-Munsters," aired as an episode of The ABC Saturday Superstar Movie. An animated sequel to the 1964-1966 sitcom The Munsters, this version features little Eddie Munster (voiced by Stuart Goetz) now grown into a drum-playing teenager old enough to drive. He's immediately paired up with two visiting cousins from Transylvania, Igor (a Frankenstein monster) and Lucretia (a vampire). They love rock music and play guitars, so naturally the trio forms an unnamed band.

Father Herman Munster buys Eddie a used hearse, complete with ghost, that of hearse driver Jeremiah Grundy (Henry Gibson). Grandpa accidentally invents a device that allows their hearse to run on music instead of gasoline. Soon the device has spread all over Los Angeles, to the dismay of local mob boss Murdock, who's recently taken over an oil refinery.

He kidnaps the Munster family pet Spot to blackmail Grandpa into destroying the music machine. Grandpa and the band defeat Murdock.