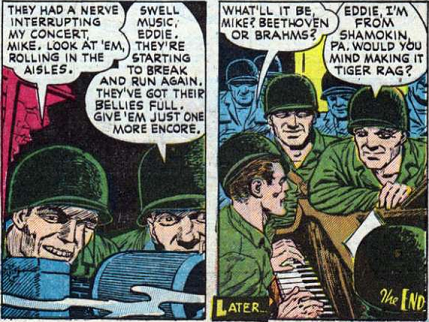 Rising concert pianist whose career is interrupted when he joins the Army to fight in the Korean War in the "Machine Gun Symphony" story of comic book Exciting War #6 (November 1952).

He risks his hands to change out a red-hot machine gun barrel mid-battle. Afterwards in the hospital, he tries to commit suicide after it looks like he will never play again. Fortunately his pal Big Mike Jordan, wounded in the same battle, talks him out of it. Once his hands heal, does the Army offer any counseling? Naah, they send him back out to machine gun more North Koreans. I guess that's a kind of anger-management therapy. A chance encounter with a grand piano in a bombed out building lets him test out his chops. With Big Mike's encouragement, he can still play! And machine gun reds!

In a flashback, we see him get his big break as a soloist with an unnamed symphony orchestra conducted by Lessini. Lessini is impressed, and then disappointed when Taylor tells him he's joining the Army.