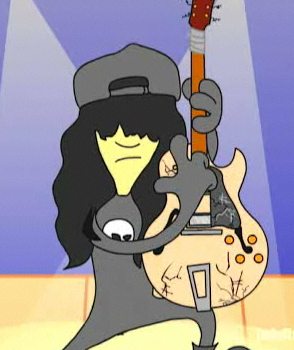 Fifteen-year-old guitarist/composer/Slash lookalike who is a regular character in the animated TV series Home Movies. Primarily depicted as the frontman of the band Scäb, he shows off his solo skills in the "Guitarmageddon" episode (first aired 27 Oct. 2002). While he's beaten by his arch-rival Jimmy Monet, his atypical playing on a broken guitar wins over the girl. Duane's voice and music is provided by series creator Brendan Small. Oh, and his name may be Dwayne; it changes a couple of times through the series.