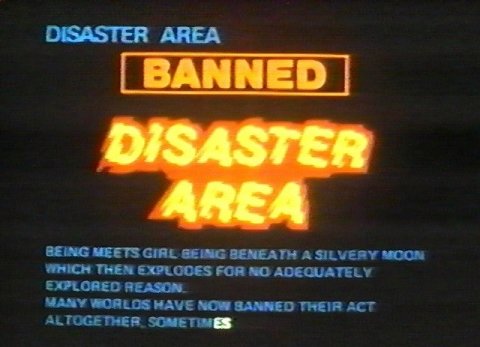 Fans agree, the best sound balance for a Disaster Area show is in large concrete bunkers some 37 miles from the stage. Douglas Adams created this louder than loud, mega-rich rock band in the sequel to his 1979 novel The Hitchiker's Guide to the Galaxy, The Restaurant at the End of the Universe (1980). Both started life as a 1978 BBC radio series, but the band was not originally in it. Then, when everything was re-redone as the 1981, six-episode BBC TV series, the sequence was used a second time. I won't even mention the 1980 rerecorded and rewritten albums of the radio series or the 1984 Infocom text-based computer game version of the books. Oops, too late! 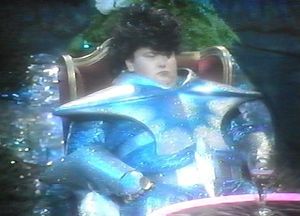 Group member Hotblack Desiato (Barry Frank Warren) [instrument unknown], is spending a year dead for tax reasons when his former pal Ford Prefect (David Dixon) tries to strike up a conversation with him at Milliways, the aforementioned restaurant at the end of the universe. Rebuffed, Ford and co. go off and unwittingly steal the band's stunt ship, which is preprogrammed to crash into a sun as part of the band's stage show.

Trivia Time! Douglas Adams got the name from London real estate firm Hotblack, Desiato and Co. He saw one of their signs and became so enamored of the name he got permission to use it.