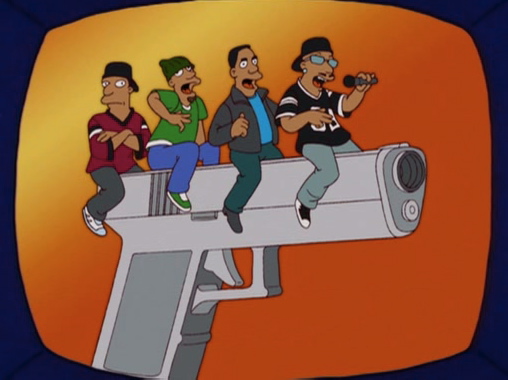 From the animated TV show The Simpsons (02/13/2005). Rap group playing the Springfield Murder 4 Life rap concert. In the "Pranksta Rap" episode, Bart sneaks out of the house to go see the concert after being forbidden to go. Bart even gets onstage and raps a bit. But when he gets back home, he finds that his folks have discovered his absence, so he fakes his own kidnapping. Real rapper 50 Cent has a cameo as himself, but doesn't play the concert. Other rappers at the concert who are just glimpsed in the tv commercial for it are Romeo Smooth, Queen Booty Shaker, and MC Champagne Millionaire.