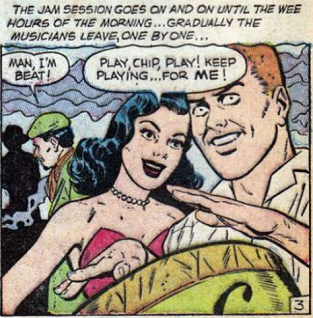 Disgruntled drummer from the "Death Drum" story of horror comic book Adventures into Darkness #7 (December 1952). He's strictly small time, to the disgust of his successful novelist girlfriend Arlene, who dumps him. Chip stumbles onto a voodoo drum in a pawn shop, and playing it releases the spirit of a witch doctor who has Chip kill the pawn store owner and run off with the drum. The drum gives Chip talent which lands him a spot in an unnamed "top bop combo," but it demands sacrifices! Chip is compelled to kill the combo's singer Dinah and dump the body. On tour, Chip and band are a big success, but he has to kill after every show. He finally goes back to Arlene, who tells him she never loved him and was only observing him for a novel about a small-time musician she was writing. Enraged, he kills her, is caught, and gets the electric chair.

The plot is suspiciously similar to the "Horn of Horror" story in comic book Horrific #11 (May 1954).