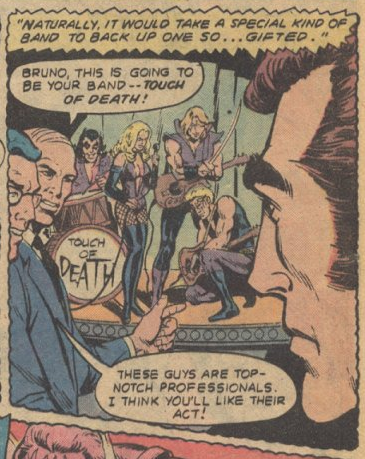 Satanic rock star from the "Blood in the Grooves" story of DC comic book House of Mystery #269 (June 1979). His brief career, only a year long, is recounted by DJ Danny Soul of WDOA.

Cardozo was just an ordinary everyday satanic warlock when he was approached by two music industry weasels, Harry Deever and Breeze Marlowe. Seeing how satanic rock is the latest trend, they're sure a real satanist will go over even bigger. They want Cardozo to front a band they've already preassembled and costumed, Touch of Death. Cardozo is not amused, but grudgingly accepts. During their first recording session, a freak lightning bolt kills the only female band member. During their first concert, a stage stunt goes awry and another band member is beheaded.

Deever and Marlowe freak out because now nobody will come to the concerts or buy his album. Cardozo uses his black magic powers to force them to let him record a second album and go on a second tour. Cardozo even mixes his blood into the ink for the album cover, a dig at rival Marvel Comics stunt that real band KISS did February 21st, 1977 for their KISS comic book.

Desperate, Deever and Marlowe put on costumes and murder Cardozo on stage and make it look like part of the act, and get away with it. But when DJ Soul plays the unheard cut "Blood on the Grooves," the lyrics spell out how Deever and Marlowe killed him. When Cardozo's hearse drivers hear the song on the radio, they're so surprised they drive off a cliff, spilling the corpse, where the cops find the murder evidence Deever and Marlowe hid in the coffin.

Written by Stuart Hopen and Barrett Andrews, and drawn by George Ruppert and Bruce Patterson. The cover art for the issue features a completely different satanic band that has nothing to do with the story inside.