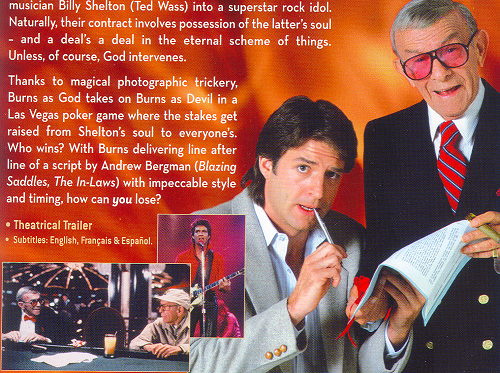 This struggling songwriter (Ted Wass) from the 1984 film Oh God, You Devil! has a loving wife and a crappy agent. When reduced to singing at a wedding, he's approached by superagent "Harry Tophet," really Satan (George Burns), who offers him a traditional deal with the Devil to become rich and famous.

However, Satan's rock star gig is a little weird. He doesn't just magically make Shelton rich and famous. Shelton becomes rock star Billy Wayne, a totally different person, played by a totally different actor (Robert Desiderio), who was already a rock star before the whole deal with the devil thing. Only, before, there was another guy who signed with Satan and became Wayne before Shelton, only his contract with Satan ran out. And when Shelton takes over being Wayne, the other guy becomes Shelton! And the whole world thinks the other guy is Shelton, including the other guy himself (?!).

Soon, Shelton becomes disenchanted being Wayne, especially when the other guy Shelton knocks up his real wife, who also thinks other guy Shelton is the real Shelton. Shelton gets unconvincingly worked up enough to commit suicide for no real apparent reason, but then God (George Burns again) and Satan play poker for his life/soul. And then there's the happy ending, and Shelton gets his life back, "Billy Wayne" is dead, and only God (and Satan) knows what happened to that other guy.