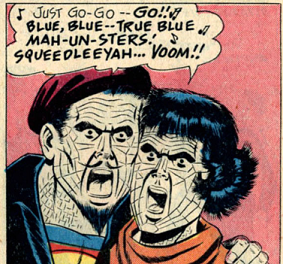 Oh man. Bizarro stories from Superman comics are always weird. But this one might out-weird them all. In "The Invasion of the Bizarro World" story of Adventure Comics #290 (November 1961), everybody's favorite cube-shaped planet disgorges lumpy blue kryptonite beings who rampage and attack the bizarro-people. Blue kryptonite radiation is fatal to Bizarros. But since Bizarros always do the opposite, they cheer the invaders on as thousands perish. In Bizarro City, goateed Bizarro-Hipster No. 1 leads this combo in a rock and roll number while singer Weep-and-Wail Bizarro Lois belts out some awesomely awful lyrics:


They am awful to see
But jimminy golly-gee
Them am real good-lookin'
next to (ugh) you 'n' me!


So welcome, Blue Monsters,
We am glad you came!
Destroy, destroy,
Us loves you just the same!
Oobahdeyoobay-Urf... Urf
Ooleeahkooleeah--Urp, Urp!


Up went the monster!
Down went Bizarro!
Who gives a hang
Or a ring-ding-dang?
Yeoowwww!!