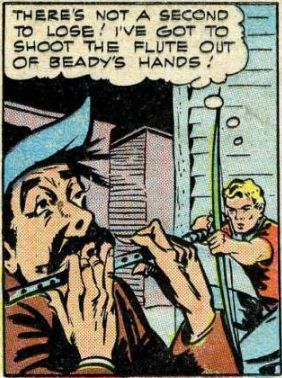 Pretty sure you don't play a flute by blowing it in the middle.

Villain with a magic flute in the "Golden Arrow and the Magic Flute" story of comic book Whiz Comics #96 (April 1948). Cowboy archer hero Golden Arrow is at first happy to help this traveler with a carousel who gives kids free rides. Beady says he's a retired carnival worker who just likes to make kids happy. But when Golden Arrow is gone and the carousel is packed with kids, Beady pulls out his magic flute and hypnotizes the kids and tells them to ransack their own houses and bring him the loot in the night. Golden Arrow stumbles on his scheme, but can't fight his town's own kids, and is captured. Beady is about to have the kids MURDER THE HERO WITH KNIVES when he escapes. Golden Arrow knocks away the magic flute and overpowers Beady, forcing him to release the kids.