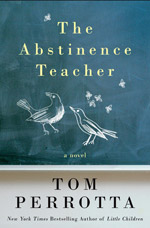 High school band of Tim Mason, protagonist of the 2007 novel The Abstinence Teacher.

"What, were you some kind of big ladies' man in high school?"
He bobbed his head noncommitally, as if to say that this was a complicated question deserving of a thoughtful answer.
"Not at first. I was a skinny kid with a bad complexion. But I joined a band my junior year. We called ourselves Circuit Breaker for a while. Then we changed it to Balin Son of Dwalin."
"That's a terrible name."
"We liked it," he said. "It was some kind of Tolkien thing."
"Balin Son of Dwalin? Why not Big Buncha Dorks?"
"Go ahead and mock," he said. "But we were pretty popular. Lots of female fans."
...
"So what happened to the band? Did Balin Son of Dwalin survive high school?"
"Not really." He shook his head, as if he hadn't thought about this stuff in a long time. "The singer and the lead guitarist got in a fight over a girl. It was like a bad divorce. The guitar player got custody of the drummer and the singer got me. Jerry and I stayed together for eight years, played in five different bands..."