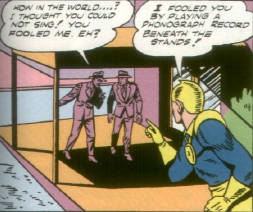 Opera singer from the "Crimes Set to Music" multi-part story in DC comic book All-Star Comics #19 (Winter 1943-44). He's exposed to gas that takes away his voice, but hero Dr. Fate saves him from permanent damage. He has Carasa lip-sync to a record to fool the thugs who did it into trying again, then captures them.

Carasa was targeted by Hector Bauer, a former childhood friend who blamed his lack of success in music on Carasa and his other friends.