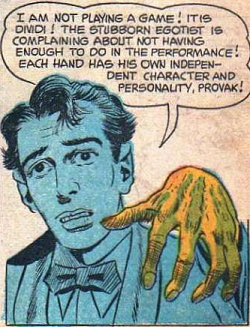 He's a student at the Nindlem Conservatory, run by the overbearing, bullying Provak, who has "...picked you up from the gutter, sweated over you...." Bellt has begun to hate playing, since there is no joy in it anymore. But Bellt has way, way deeper issues anyway. He treats his two hands like two separate entities, and has even named them, Dividi (left) and Pompo (right). He has to cajole and encourage them through his performances! Dividi is quite the diva, even.

When Provak pushes too hard, his hands push back, literally, striking out at Provak while Bellt is asleep! Eventually Dividi strangles Provak to death, but Bellt is found innocent, because he is obviously too frail to have strangled a brute like Provak. But Bellt can't live with the knowledge that his hand is a murderer. They struggle, and Dividi strangles Bellt to death in a triumph of short-sightedness.