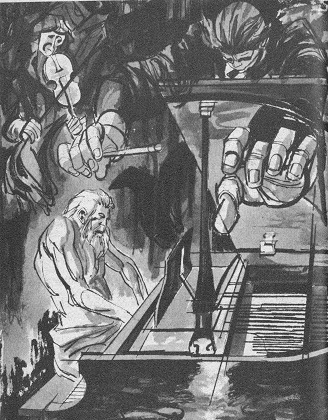 Brian Van Anda, seated, and his vision of Carr, from The Music Master of Babylon by Edgar Pangborn, illustration by Krigstein.

Australian classical composer from the novelette The Music Master of Babylon by Edgar Pangborn, first published in Galaxy magazine vol. 9, no. 2 (November 1954).

Carr is idolized by pianist Brian Van Anda, who has survived world war (the story is set in 2096) and lives in a deserted New York City. His big project is to perform Carr's demanding piano sonata perfectly.

Andrew Carr, who lived and died in the latter half of the 20th Century, had endured the idea from the beginning of his childhood. The date of Hiroshima was 1945; Carr was born in 1951; the inexhaustible wealth of his music was written between 1969, when he was eighteen, and 1984, when he died in an Egyptian jail from injuries received in a street brawl.

Carr had been a drunken roarer, a young devil-god with such a consuming hunger for life that he had choked to death on it. His friends hated him for the way he drained their lives, loving them to distraction and always loving his work a little more. His enemies must have had times of helplessly adoring him, if only because of an impossible transparent honesty that made him more and less than human.

A rugged Australian, not tall but built like a hero, a face all forehead and jaw and glowing hyperthyroid eyes. He wept only when he was angry, the biographers said, 'in one minute of talk, they said, he might shift from gutter obscenity to some extreme of altruistic tenderness, and from that to a philosophical comment of the coldest intelligence.

He passed his childhood on a sheep farm, ran away to sea on a freighter at thirteen, studied like a slave in London with a single-minded desperation, even through the horrors of the Pandemic of 1972. He was married twice and twice divorced. He killed a man in an imbecile quarrel on the New Orleans docks, and wrote his First Symphony while he was in jail for that. And he died of stab wounds in a Cairo jail. It all had relevancy. Relevant or not, if the sonata was in your mind, so was the life.

You had to remember also that Andrew Carr was the last of civilization’s great composers. No one in the 21st century approached him — they ignored his explorations and carved cherry-stones. He belonged to no school, unless you wanted to imagine a school of music beginning with Bach, taking in perhaps a dozen along the way, and ending with Carr himself. His work was a summary and, in the light of the year 2070, a completion.