A Thousand Strings and a Nose Harp 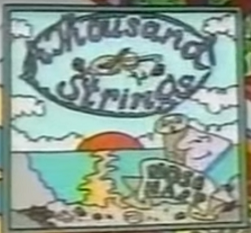 In the "Doug's Adventures On-Line" episode (June 5, 1999) of animated television series Doug, Teen Doug and his friend Honker are trying to pick some oldies to play for a school dance, and mention this band and the album cover is shown.

The name is probably a reference to real bands 101 Strings, or The Incredible String Band.