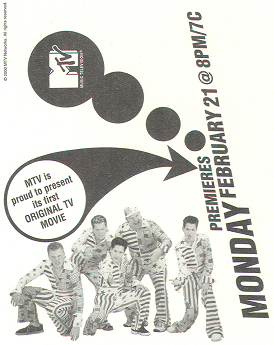 A spoof of those damned MTV "boy bands" - on MTV! They were in a 2000 made-for-tv-movie, and then turned into a series. Jerry O'Keefe (Evan Farmer), Mickey Parke (Alex Solowitz), Jason "QT" McKnight (Michael Cuccione), Chad Linus (Noah Bastian), and Doug Linus (Kevin Farley) -- all live in a house paid for by their record label. They have two albums out.