Difference between revisions of "Turin" 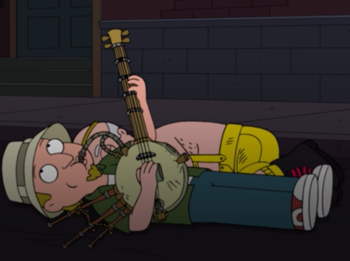 The turin being played

Instrument from the planet Gewee that's like a combination of a lute and bagpipes.* It's made of yarelwood, is designed to be played by creatures with more than one mouth (while lying down), and was originally created to soothe dragons. The b-plot of the "Standard Deviation" episode of animated sitcom American Dad! (first aired 27 June 2016) focuses on it.

Series regular Jeff learned to play it in a hallucinatory vision he had.

*That's how the show describes it. We at Rocklopedia HQ think it looks more like a banjo.