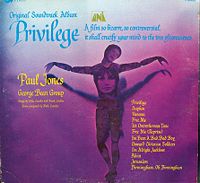 From the movie Privilege (1967). Paul Jones, lead singer of Manfred Mann from 1963-66, portrayed this English singer in this odd 1967 British film. Shot documentary style, and set in the near future, the British government manipulates the populace thru this enormously popular pop singer. How popular? Bigger than Presley times the Beatles. There are a couple hundred Steve Shorter discotheques, there's Steven Shorter dog food, his cut hair is donated to charity, and fans have Steve tattoos on their hands, palm AND back. There are even Steven Shorter television stations (SSTV 3)! All backed up with the full approval of the government. His violent, emo-act has him led onstage in handcuffs and thrown into a cage, and culminates with him being beaten by half a dozen cops. And that's just ONE SONG. It's hard on the wrists, as it's his real blood. But now the government is ready for phase two.

They've built him up over two and a half years, and now it's time to completely revamp Shorter's image from victimized bad boy to redeemed, conforming, good-natured doormat. And get those troublesome youth to follow him like sheep. The government and Steven Shorter Enterprises hook up with the Church to basically turn him into a Christian rocker, at a big concert/Nazi-esque fascist rally. Shorter finally breaks down two weeks later at huge awards ceremony receiving a special award from Federated Records. One stammering, twitchy speech about about how "You've made me nothing... I hate you!" later and his career is utterly finished. It's implied that two years later, no one even remembers him, and almost all footage of him has been destroyed, 1984-style. 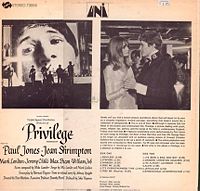 Soundtrack album back
Retrieved from "https://www.fakebands.com/wiki/index.php?title=Steven_Shorter&oldid=1702"