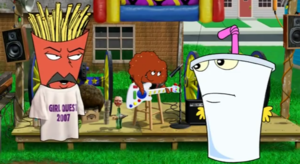 Later, in the "Chicken and Beans" episode of Aqua Something You Know Whatever, the third incarnation of the TV show (first aired 1 July 2012), he plays the "Sub Standard" restaurant. He's basically the Meatwad of other episodes, only with long hair. His show is fairly underwhelming—the MC introduces him as "Meal Wand," Meatwad keeps forgetting the lyrics of his song "Chicken and Beans," then he vomits everwhere. However, once his "NotUTube" video nets 300,000 hits in one hour, he's invited to perform on Lopez Tonight. (Which was actually cancelled the year before.)