Difference between revisions of "Krusty the Clown" 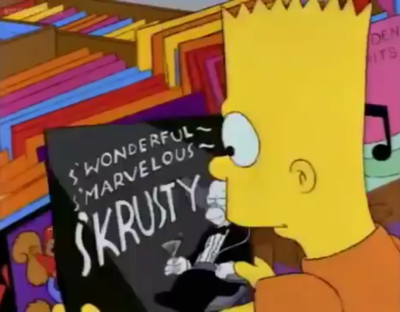 Stage name of Herschel Shmoikel Pinchas Yerucham Krustofsky from animated television series The Simpsons. While mostly an actor and host of a children's show, he has occasionally branched out into singing.

In the "Like Father, Like Clown" episode (24 Oct. 1991), Krusty sings on his show with a house band identified on the bass drum as Krusty and the Krums.

In the "I Love Lisa" episode (February 11, 1993), he shows a old clip of himself from 1973 singing The Doors' "Break on Through" on a show called Kroon Along With Krusty.

His album S'Wonderful - S'Marvelous - S'Krusty is shown in the "Homer's Barbershop Quartet" episode (30 Sept. 1993), next to a Melvin and the Squirrels album.

In the episode, "A Star is Torn" (05/08/2005), he creates and hosts the television series Krusty the Klown Li'l Starmaker Competition. On that show within a show, Lisa Simpson competes against Clarissa Wellington and Johnny Rainbow.