Difference between revisions of "Hot-Breath Harry" 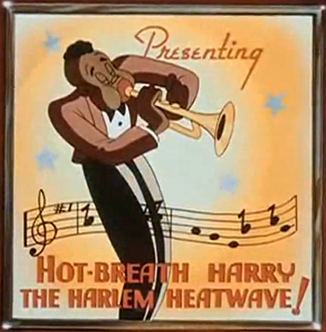 A successful featured member of a jazz band at club The Boogie Hatch, Hot-Breath (aka the Harlem Heatwave) is drafted into the army and forced into bugler duties. He's rightfully nervous as his fellow company members beat up the old bugler because everybody hates getting up at 5:00 am. But his boogie-woogie style charms everyone.

Unfortunately, the cartoon is just one African-American racist caricature after another. It looks like Lantz spent five minutes on character design, and used that for almost every single character in the short.