Difference between revisions of "Hillary Gomez" 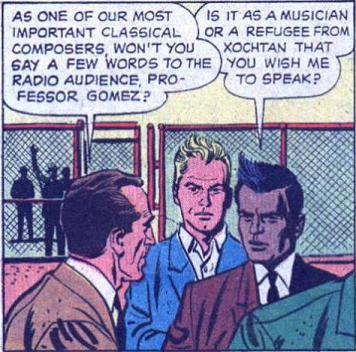 South American composer from the one-off Dell comic book Brain Boy (April-June 1962). He's "...the greatest composer of scores for the modern ballet- as well as the best conductor-- the 20th century has yet produced...." Gomez fled his fictional home country of Xochtan due to the dictatorship of General Droz. Now he is heading back to the capital, Aquazil, for a music festival. American telepath Mark Price, aka "Brain Boy," is sent by a secret American government agency to protect him.

Unfortunately, it's all a complicated trap set up by Droz to punish Gomez. Gomez is kidnapped, drugged, and replaced with a double. The double renounces capitalism and praises the party at his festival speech. But then the double is suddenly double-crossed by Droz and gunned down, and Droz blames the murder on Americans and cancels the festival.

Brain Boy uses his mind-reading and controlling powers to figure out the plot, track down and save Gomez, and escape a tank attack by Droz's own power-hungry telepath, Ricorta. He gets Gomez safely back to America.