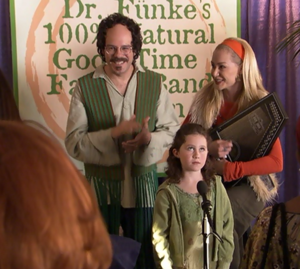 See, Dr. Fünke's etc. etc. etc. is just a means of selling supplements: Zanotab (may cause dry mouth, hair loss, an overly alert feeling, and in some cases may diminish your sex drive) and Teamocil (a now-banned nutritional supplement that promotes feelings of teamwork... and decreases sex drive, reduces short-term memory, and causes sleepiness. But let's get one thing clear: it doesn't cause hallucinations). The group was underwritten by the Natural Life Food Company, a division of ChemGrow, an Allyn-Crane Acquisition, and part of the Squimm Group.