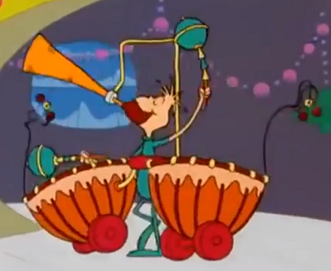 Semispherical drums native to the Whos of Whoville, from the 1966 Dr. Seuss animated television special How the Grinch Stole Christmas!

A wheeled, conjoined pair of kettle drums, or timpani, are played with decorative mallets, augmented with a centrally mounted single reed bulb horn played by squeezing the bulb with one's mouth as you've run out of hands. Some spring-mounted jingle bells attached to the drums probably resonate when the drum is played and don't require striking separately.

The instrument is not in the original 1957 book.